There appears to be only one VIP/business lounge at Havana Airport and so no matter what I write here, you will most likely want to go there anyway when flying from Havana.

This my experience in 2015, so the lounge may have improved since then.

My Virgin Gold card should mean priority check in, fast track security and lounge access. Our boarding passes had VIP written on them in ballpoint pen but we’d already found that this didn’t carry much weight at the airport immigration and security.

We initially walked straight past the lounge as there weren’t any signs, then doubled back and realised that it is just on the left after you clear security and immigration. The lady on the desk seemed flustered when we arrived and beckoned us to follow her while she took our boarding passes into the kitchen – when she re-appeared, it was clear that we’d passed muster.

I found a wi-fi signal and asked about the password – only to be told that this wasn’t for lounge visitors. There was a computer station near reception, but this had been taken over my some Canadians.

The lounge had a refrigerator containing some soft drinks and beer – all pretty warm. There was an unattended bar with some bottles of spirits (including peppermint schnapps) and a lonely, unopened, warm, bottle of sparkling wine. There was no ice. It was a bit like looking at a kitchen the morning after a party. I’m guessing that wine bottle will become an institution in the lounge – I’m looking forward to visit it again sometime. 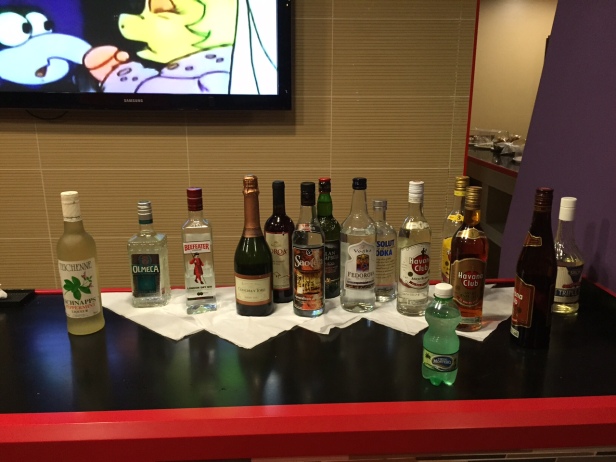 I decided to take a beer. There wasn’t a bottle opener in sight and so I had to visit the reception desk – the lady took me back to the bar and found an opener – hidden behind the counter and on a long string.

There was a small food buffet consisting of some bread, ham, olives, cake and cupcakes with artificial whipped cream. Everything looked like it had been around for a while and the lounge was quite warm. 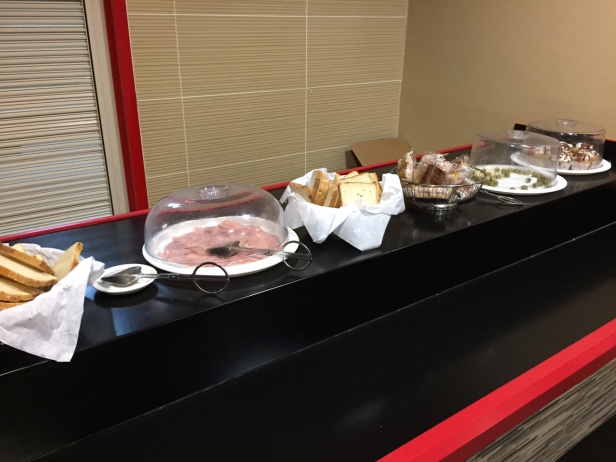 I was surprised later to see that the ham had been quite popular with a couple of Spanish-speaking businessmen.

The flat screen TV showed children’s cartoons for the entire time we were in the lounge. There was another screen by reception that showed flight departures.

Upstairs was a smoking room which was pretty smoky considering that nobody used it. The toilets were okay.

I could hear, but not understand, the casual chatter coming from the kitchen. There were two or three people hiding in there the entire time and I’m guessing they thought they’d done enough to justify the ‘Elegante’ name.

We only pick the best…..
Where Virgin Atlantic Airways does not have its own Clubhouse, an alternative lounge is used. These shared lounges are either owned by the Airport Authority or another airline and are offered to our Upper Class passengers.

I suppose to be fair, they did pick the best lounge as it is the only lounge!