The hotel has eight floors, but only three of these are guest rooms. Floors 5-8 are long-stay apartments. I booked a standard guest room for four nights; first night paid, nights two and three using points and night four paid.

I popped in to the hotel a fortnight prior to my stay to ask if I could put my shirts into the hotel laundry service and have them back when I arrived. The receptionist advised this wasn’t possible as I didn’t have a room number to which I could charge my laundry. And so I used my regular dry cleaners (£2.50 per shirt washed and ironed) and this worked out well as I found the Holiday Inn charge £5 per shirt after I checked in – so the receptionist saved me some money. I also found that they use the same cleaners.

I checked in and presented my Platinum Elite card which had been sent to me by IHG last October following my downgrade from Platinum Ambassador. Platinum Elite is still quite high and although I wasn’t desperate for an upgrade, I did wonder if there would be one. The receptionist checked my reservation and advised that I was now just a basic member – he behaved as if I was trying to pass off a fake banknote. I said “well that’s the card they sent me and it says expiry October 2016, but you’re probably correct as I haven’t stayed in a Holiday Inn this year”. I did actually but they were all using points and so didn’t count. I explained that I was staying four nights on three bookings. I was given my room key card and a paper wallet with the number and check out date – which showed the next day!

I found there was only one elevator, although there is a service elevator which I suppose could be used if there was a breakdown. I had to wait a while and wondered why, in a new built hotel, with eight floors, they had decided that one elevator would be sufficient. My room was on the third floor.

The room, clearly a standard room without any complimentary bottle of water, was clean and modern, but quite hot. The electrics including the air con are controlled via a card slot – but as we all know you can put any credit card sized piece of plastic in these slots to get things working. I closed the curtains as the room faced the sun and car park and got the air con running. I’m not sure if this applies to all rooms, but I found that the 25 degree setting actually cooled the room to about 19/20 and anything lower was too cold.

There was a large flat screen TV with numerous Freeview channels, a keypad entry safe, a kettle with coffee and tea. Wi fi was free, although was sometimes a bit slow. There were numerous electrical sockets and also a USB charging socket. The bathroom was modern and functional, a (very good) shower but no bath, plenty of towels, minimal toiletries. There was a half full box of tissues and once gone these were never replenished.

The biggest issue with the room was the lack of storage space. The wardrobe only has four hangers and these are arranged front to back instead of side to side – the wardrobe isn’t deep enough to hold the hangers in the conventional mode. Try taking something from the rear hanger when there are clothes on the ones that are in front. The only other storage space was a set of three small drawers in the bedside cabinet.

A newspaper was left outside my door for the first two days, but then nothing for the next two.

There was a restaurant that I didn’t use. The pricing seemed a little odd, overpriced soup for £5 but a good value full meal for £8.75. There is also a Starbucks on site. There is a large outside terrace, but this ends and leaves a large, inaccessible area that could have been used for parking or something else – now it just looks like an unkempt piece of waste ground.

I had to re-check in the following day and was told to return two days later to re-check in for my last night. Then on the afternoon of my last night the hotel called me around 3:30pm to ask why I hadn’t checked out. I had to explain, again, that I had a separate booking and this was found – the caller advised that I would be able to keep the same room. Well lucky for me as I had all my things there including an iPad in the safe. 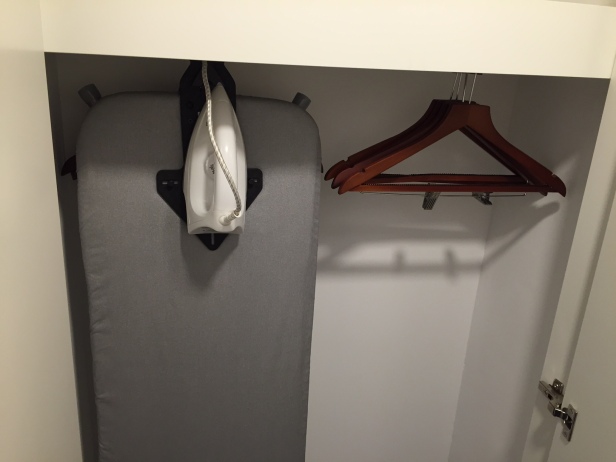