I booked this hotel as it was really convenient for both Nice Airport and the train station. We were only staying two nights and both days we planned to be in Monaco – 30 minutes by train for 4.5 Euros.

I also have a Club Carlson Gold Card and so hoped for a few extra benefits.

We flew in to Terminal 2 and I’d read that the best way to get the hotel was to take the T2-T1 shuttle and then walk. We alighted at Terminal 1 and could see the hotel – we just couldn’t work out the best way to get there. We walked over a bridge and across a road, only to find ourselves on the other side of the fence to what appeared to be the hotel’s car park. We continued along that until we were able to walk down a street and access the hotel – please don’t do that and read the following paragraphs.

From Terminal 2, we should have stayed on the shuttle bus, as after T1 it returns to T2 via a bus stop just across the street from the hotel.

From Terminal 1, we should have turned left, into the car park and followed a path marked by red lines. This leads through a tunnel and into more parking and the hotel is just beyond that – I’d say 5 max. 10 minutes walk from T1. Below are some pictures I took of this easy route: 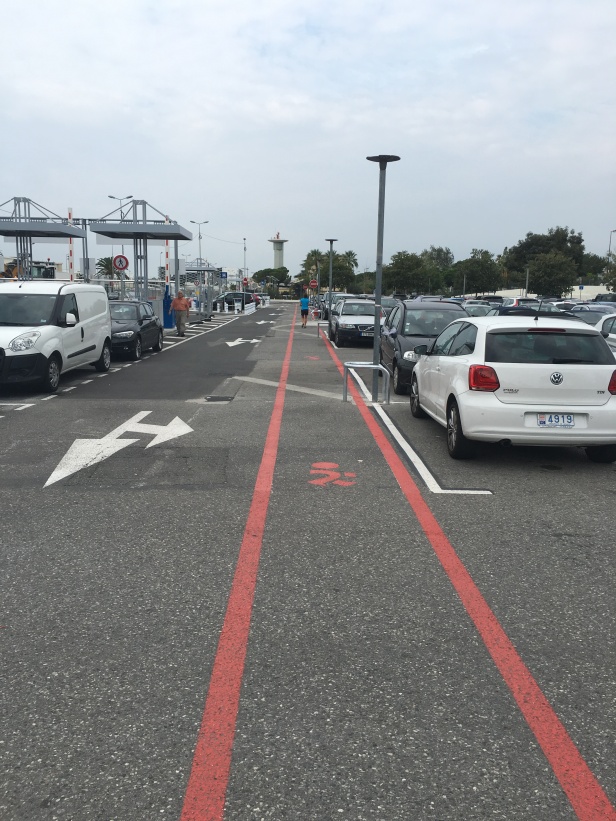 3. Continue through the tunnel – you can’t get lost after that! 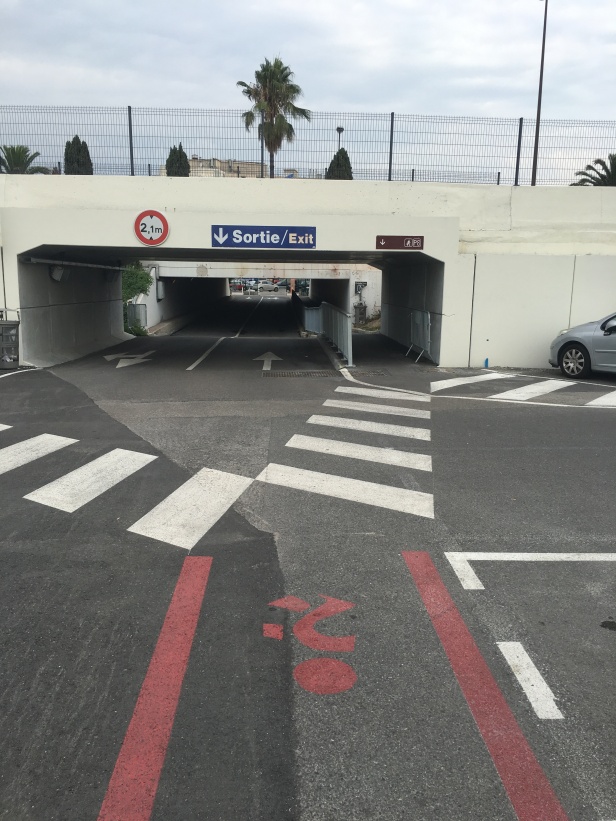 I had my best school French prepared for check in, but all that was needed was Bonjour and the friendly desk agent (Arjan) spoke to me in English. He checked us in without any issues (was 2pm) and I think upgraded our room – I’m not that familiar with the Park Inn brand and so I couldn’t be sure.

The room and bathroom were perfectly fine. There was a good-sized safe, enough for a couple of laptops. The wi-fi was good and didn’t require you to constantly re-connect and re-validate. Two complimentary bottles of water were left each day. The bed was comfortable. There were two bathrobes.

We were quickly on our way to Monaco by train using directions to the station provided by Arjan on reception. The train runs along the coast with good views of the coast. I wouldn’t say that it is a pleasant or scenic walk to the station but I still think the train is the best option. Other options for Monaco are:

We ate mid afternoon in Monaco at the excellent Amici Miei Italian Restaurant. So we weren’t looking for a large dinner back at the hotel. All food and drink was being served outside in the poolside bar/restaurant. It wasn’t anything fancy, mainly pizza, pasta and steaks – but we spotted a cheese and ham plate (the translation not really matching the French which promised the equivalent of antipasto). And it really was a large plate of mixed cheeses and meats for a good price of about 15 Euros.

Another comfortable night and we checked out around 10:30am. The lady on reception forgot to apply the 15% food and beverage discount for Club Carlson Gold, but then refunded that amount.

I’d definitely recommend this hotel if you need a base near the airport for a night or two. I don’t think the hotel expects anyone to book for a week’s stay, although you could do that without any problems.