I was booked to fly BA Club Europe from Prague to London Heathrow on the 20th February. I received an early-morning email from BA to say:

Flight Information
Dear Customer,
Flight BA0857 on 20-Feb/PRG – This service is operated by Titan Airways on our behalf. We apologise for any issues this may cause.

BA use Titan where they have a crew/aircraft shortage. The mixed fleet strike over the weekend was probably the reason this occasion. I envisaged a complaint to BA about some element of service that was missing. The reality was that Titan Airways were mostly much better!

I took my seat 1D – the bulkhead was slightly closer than on the usual BA flight. The leather seat was a little shabby but more comfortable than the BA equivalent. There was a corridor between 1D and the galley – all passengers boarded via this route.

A glass of champagne was presented – something that doesn’t happen on BA Club Europe.

There was a manual security demo – I prefer these to the same old ‘picking up the teddy bear’ video. The downside was that passengers were advised that they couldn’t use portable electronics during take off and landing – different airline, different rules, but on a short flight like this that eats into my iPad play.

We were told that a meal and drinks would be served in Club and a snack and drinks in economy – what a bonus for economy passengers who would have been faced with BA buy on board!

Once airborne and even with my headphones on, the aircraft was noisy.

Hot towels arrived. Drinks were offered and delivered – they were from the same bar as BA use. Food choices were the same as BA, so the Club food has been loaded. I’ve no idea what the selection was in economy, although I bet nobody complained about the lack of BOB Marks & Spencer sandwiches.

The business toilet was clean and had nice amenities.

There was an in-flight entertainment system available, but it required an app that had to be downloaded from the App Store – so pretty useless unless you knew that before you boarded. 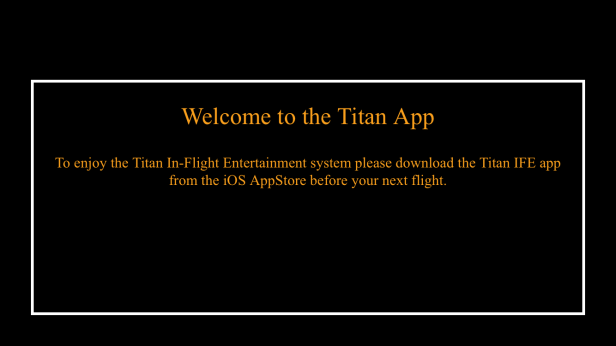 Tables were cleared and more hot towels arrived – never seen this before in BA Club.

The flight was perfectly on time. Disembarking was from a door just behind the last row of business. The flight attendant held back economy passengers until Club had de-planed.

So a pretty good flight that actually felt more like business than BA. I’d certainly be happy to find my next flight, economy or club, was replaced by Titan Airways.