In 1761 Mr William Nash, the first Consul-General of Madeira, asked the Portuguese Government if he might buy land for use as a burial ground for British residents. Prior to this time Protestants were not allowed to be buried in local cemeteries and were consigned to the deep off the coast near Garajau. An Order in Council from Lisbon dated 3 January 1761 gave approval for a cemetery in Funchal provided that it was located at the outskirts of the town; so Mr Nash bought a piece of land just outside the city wall, an area of ground centred on an old orange tree and known locally as A larangeira. The first grave dated from 1772 and was that of Mrs Shipcote, the wife of a taverner. Her great nephew, writing in 1841, recalls being present at her burial underneath the orange tree, with the tomb of Judge Miles, the second to be buried, lying alongside.

The cemetery is located up a hill about 10 minutes walk from the centre of Funchal. The main gates are closed – a note asks that you continue to a nearby door. 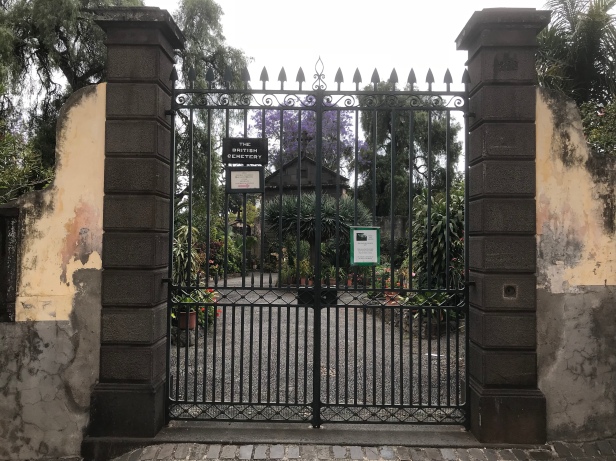 When you find the door you need to pull, not press, the bell.

The doors opens, seemingly automatically, but then you realise that it is attached to a string and elaborate pulley arrangement.

A narrow passage leads to the garden and small church. 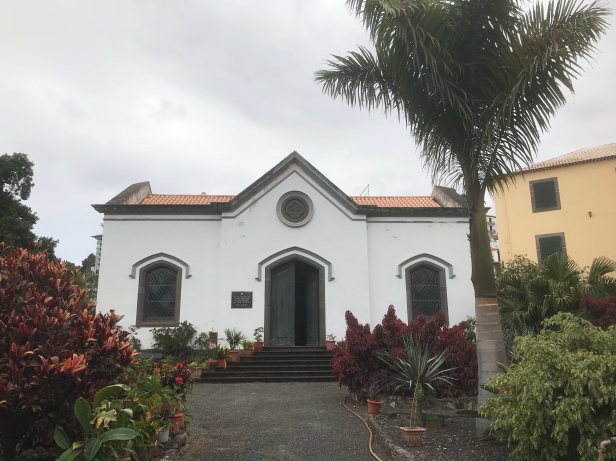 There are two graveyards with graves of the following:

By far the most interesting grave is that of Sara Forbes Bonetta (1843 – 15 August 1880) a West African Egbado princess of the Yoruba people who was orphaned in intertribal warfare, sold into slavery and, in a remarkable twist of events, was liberated from enslavement and became a goddaughter to Queen Victoria.

Only a small hand-written sign and wooden tribal mask identify the grave.

The British Cemetery is well-worth a visit. There is no admission charge but there is a donation box.