Several other Eastern Airways routes from Teesside were already launched this year; Cardiff, Belfast City, Dublin, Southampton, London City. These in addition to an existing route to Aberdeen. It looks like the London City route will be dropped in favour of the Heathrow route.

Eastern Airways will use Terminal 2 at Heathrow, with flight schedules as follows:

Fares start from £54.99 each way, including taxes, charges and 15kg of hold luggage.

It will be interesting to see if this route can lure away oil and gas workers from the KLM to Amsterdam service. My guess is that although they previously connected via Heathrow, en route to Middle East, connecting via Amsterdam turned out to be convenient and cheaper. And they’ll likely be holding KLM Gold cards providing them with lounge access.

Up to three hours of parking at Teesside Airport is free. Contrast that with £4 for 15 minutes at Newcastle. Having someone drop you by car is a good option, as Teesside Airport railway station is almost a one mile (1.6 km) walk from the terminal and only one train per week stops there – that’s at 14.54 on a Sunday! Here’s the station on a bleak winter day. 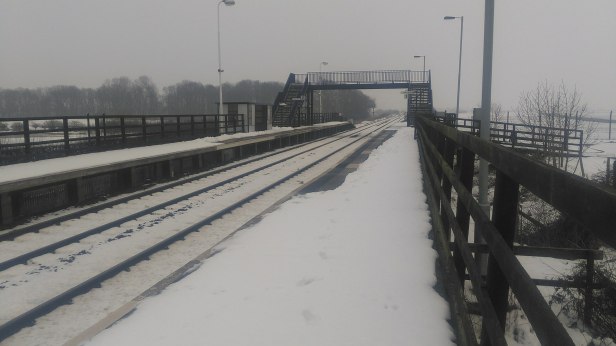 Prior mismanagement of the airport led to a Passenger Facility Fee (PFF) of £6 which must be purchased prior to passing through security. The Tees Valley Mayor has pledged to abolish the charge once the airport’s finances improve. 26th April 2021 update: The fee will be discontinued fro June 1st 2021.